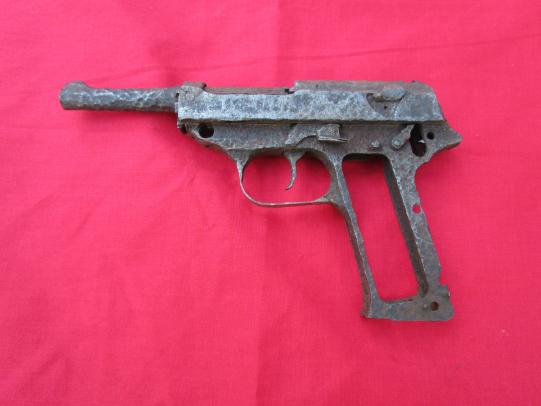 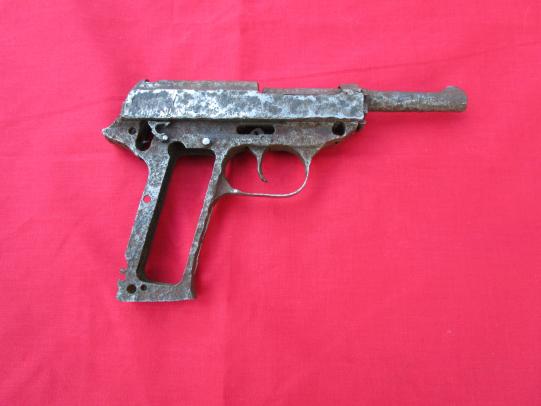 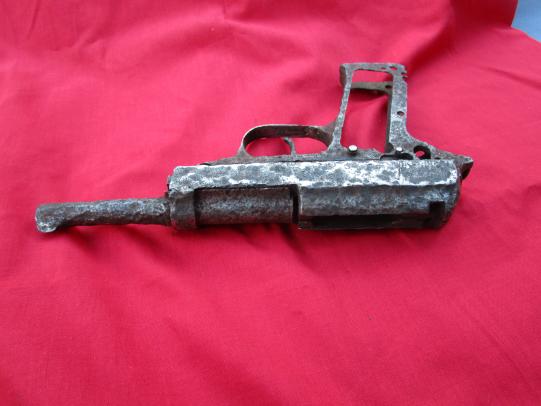 This is a relic P38 9mm pistol, found in the KURLAND POCKET AREA of Latvia in the positions of the German 16th and the 18th armies. Here is a brief history of the battles that took place in the Kurland pocket.

In the middle of October 1944, about 500,000 soldiers -- 32 German divisions and the 20,000 men of the Latvian Nineteenth Division of the Waffen–SS -- were cut off from the rest of the German army and encircled. To the east and the south was the Soviet army, to the north and the west -- the Baltic Sea. The Latvians called it Kurzemes katls, the Kurland kettle; the Germans called it Festung Kurland, Fortress Kurland.

For the Nineteenth Division Kurland was truly the last stand. They took part in six major battles between October 12, 1944, and April 3, 1945. Together with the German army units they on the whole held the front line, keeping the Bolsheviks out of Kurland, until May 8, 1945, when Germany capitulated. These soldiers remained undefeated until the final moments of the war, im Felde unbesiegt, as the Germans say. In one of the last battles, Captain Miervaldis Adamsons' company in a single 24-hour period repelled seven attacks by the Russians, and after the battle the bodies of 400 fallen Soviet soldiers could be counted in front of the Latvians' unconquered positions.

The Soviet High Command asked the commanders of the First and Second Baltic Fronts to take forceful action in Kurland, in order to drive the enemy from the northern sector of the Baltic Sea and free their units for more important positions on the Soviet-German front. The first attempt occurred on October 16, 1944, but was stopped in the area around Tukums. The next Soviet offensive took place on October 27, but met with strong resistance from the outset and did not result in any gains. November 20 saw another offensive, but the Germans and Latvians stabilized their defensive line, utilizing favorable geographic features. Equally unsuccessful were the final attempts of the First and Second Baltic Front Armies to liquidate the German Army Group "Kurland" in December of 1944 and February and April of 1945.

Soviet documents show that Stalin threw division after division into the Kurland inferno, disregarding the appallingly high losses. According to German estimates , the Soviet army lost 320,000 soldiers -- including those fallen, wounded, and taken prisoner -- and 2388 tanks, 659 planes, 900 cannons, and 1440 machine-guns.
This pistol has been surface cleaned and is ready for display.
The price of this gun includes the postage by Special delivery to any where in the U,K.
Buyers outside of the U,K. please email for shipping cost, also please check your local Laws to make sure you are able to receive this Item.